My home in Oregon has no basement. While this is normal in an area with a shallow frostline, having grown up in Michigan I didn't know where to put all of the "extra" stuff that was overtaking my garage. To mitigate this I constructed a shed along the edge of my property to the maximum dimensions allowed without a permit in Hillsboro (200 sq ft).

While I found many plans online for shed designs, the relatively steep sloping yard where I wanted to put my shed kept me from starting the project sooner. I eventually decided to build a foundation on concrete pillars. While this is somewhat overkill for a shed, with my slope and the wetness of Oregon I would not be confident with any less. 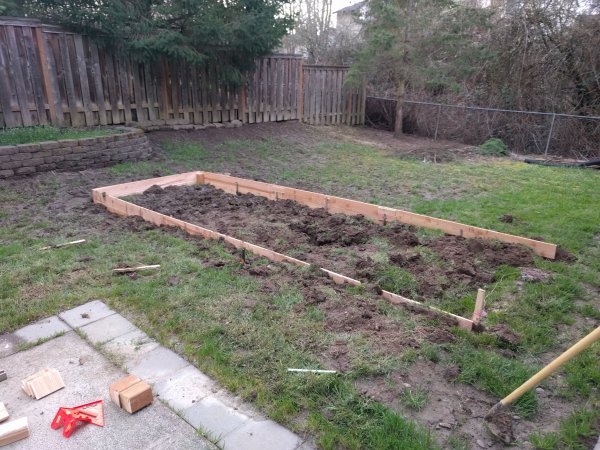 2017-03-20 A quick picture of my garden bed being built. In the background you can see the layout of the yard and a tree in the corner. Soon after this picture I felled this tree in preparation for the shed. An electric pole saw is now one of my most favourite arborist tools. 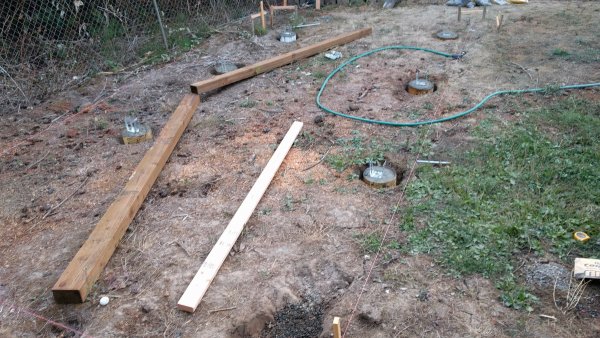 2017-09-12 I ran some string lines around the expected footprint of the shed. Eight pillars give a solid foundation for this 20ft x 10ft shed, and allows me to use four ten foot beams to support the joists. This is desirable over 20ft beams as I can transport ten foot long materials in my car.

I used 10" diameter tubes but only went 18" deep. This would not be considered below the frost line for my area, but talking with coworkers it should be sufficent. Also: this is a shed, not a house. 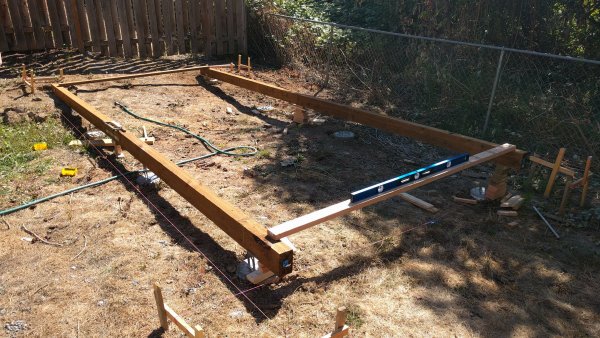 2017-09-15 This picture captures the slope I'm building on. In one corner I actually excavated some dirt and put down some pea gravel where the beam would contact the ground. The opposite corner is over a foot off the ground.

This picture is taken three days after the the concrete was poured. I spent a whole evening trying to level the beams before realizing the 24in level I owned was inaccurate. NEVER USE THE YELLOW LEVELS FROM DOLLARTREE. When I discovered the yellow level would read differently when flipped over, I purchased the aluminum level and finished leveling in one evening. 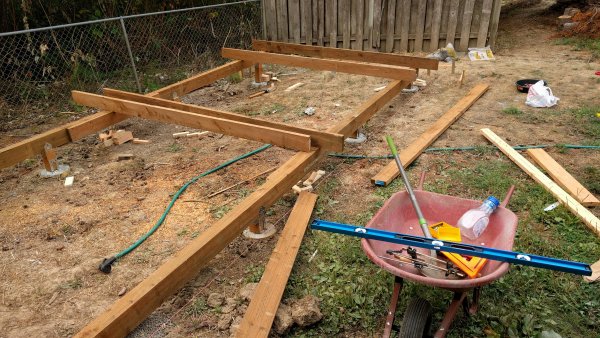 2017-09-16 I opted to use pressue treated 2x6 floor joists. As these boards will never contact the ground this is overkill, but the dollar difference is relatively small between pressure treated and bare boards.

Also seen in the picture is the 4x4 posts are now in-place holding the beams up. And the beams are tied together in the centre with a steel strap and 2x6 boards. That joint should not be load bearing but I hope that tie will help alleviate some creaks and shifting during the life of the structure. 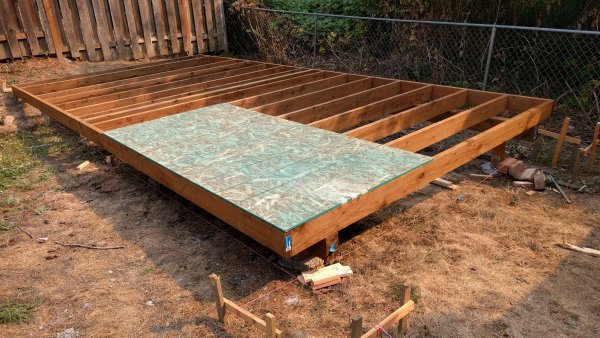 2017-09-16 All of the joists in place. I thought I was clever by using a piece of OSB I had in the garage to approximate square. I still checked by measuring the diaganols. 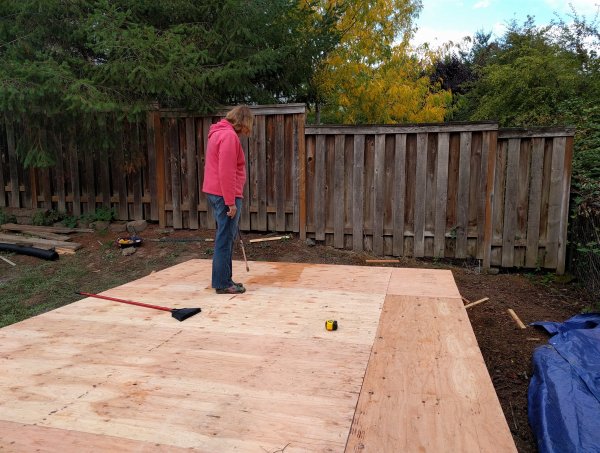 2017-09-29 I was able to get the flooring installed before Oregon's rains started, but the rains came soon after. Here my mother is using my flame weeder to dry the deck before we apply paint.

I was able to build the foundation on my nights and weekends thanks to the lack of rain and relative robustness of unfinished decking. When it came time to turn my deck into a shed, I took a Friday off work and built most of the structure. 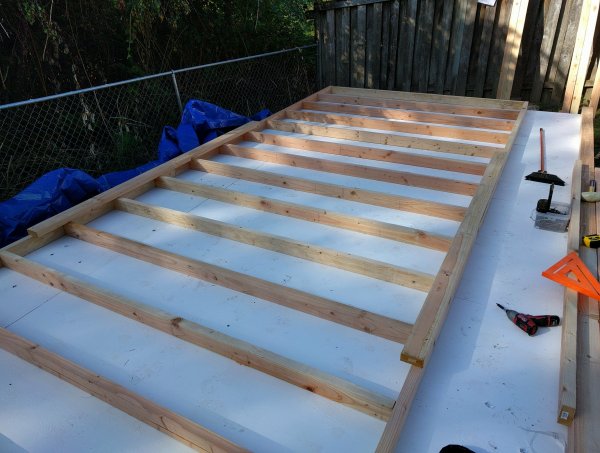 2017-09-30 Again, I'm joining two 10ft boards together to span the 20 foot shed. The boards in this picture are tempoary for standing up the wall, but I do reinforce the middle once the walls are up. 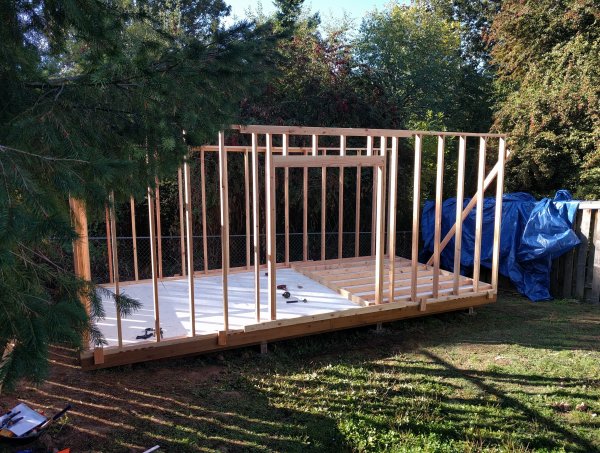 2017-10-03 The walls are up. While I used as many tricks as I could to make my life easier, this definately is not a one person job and I am thrilled my mother's visit coincided with this shed build.

Some quick learnings I experienced:

I do wish I watched a few more videos on building walls. While mine turned out well, I think it could have gone faster if I did more research 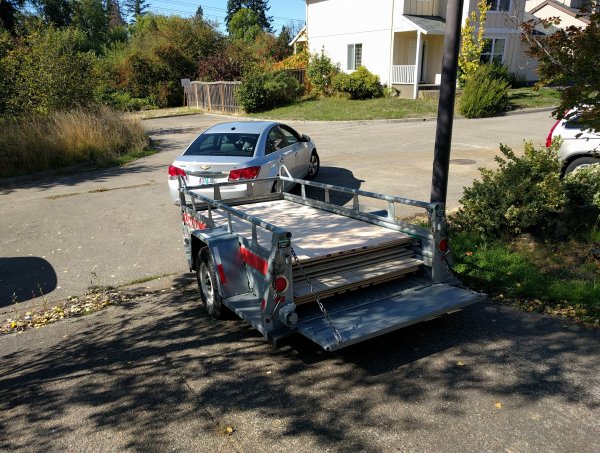 2017-10-03 This is the second of two trailer rentals required for this project: once for the flooring and once for the siding & roofing. There were many other trips to Home Depot, but boards can hand out my trunk. 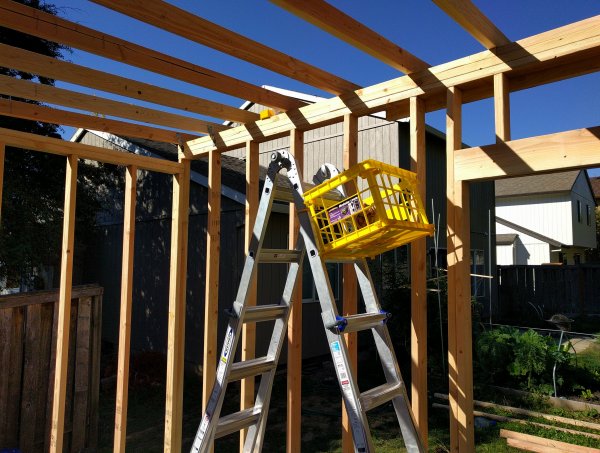 2017-10-03 I really like my multipurpose ladder, however it does not have a shelf like a step ladder. A crate and two bungee cords solved this problem.

Also seen in this picture is how I attached the ceiling joists with hurricane ties. I wanted to minimize the number of cuts performed as possible. 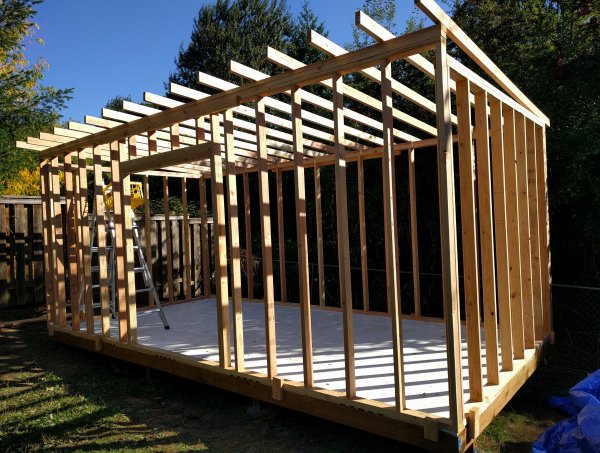 2017-10-03 All of the ceiling joists secured. I deviated from my plans on the roof in three major ways: 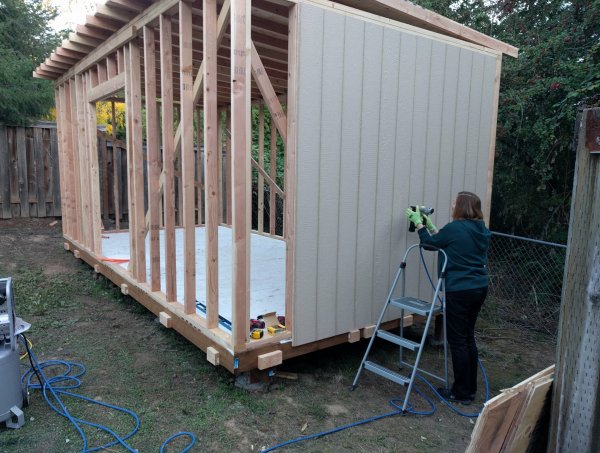 2017-10-05 Again, having my mother to help with the shed was a huge help. In this picture we are attaching the T1-11 siding. The siding is held by a few screws and a few hundred brad nails. That 18ga brad nailer came with my air compressor and works fine, but in hindsight I wish I had opted to purchase the proper 15ga framing nailer for this job.

Also pictured here is one of the largest mistakes I made in this construction: the sheets are already in-place on the roof. I had gotten in my head that I needed sheeting on the roof to protect against the rain. However, a structure like this derives ridgitiy from the siding. Even with the cross bars quickly attached for support it was nerve racking to work on the wobbling structure. And nerviousness aside, I struggled with attaching the roof sheets squarely. The siding should have been installed first. 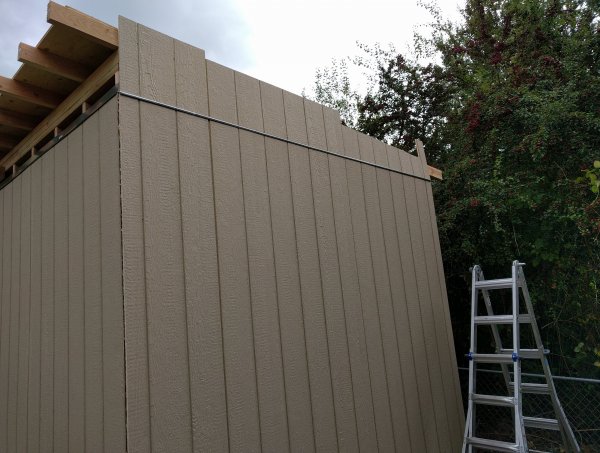 2017-10-07 Scabbing in siding to finish the 10ft walls. To clean up the boards I used a circular saw or a router with a flush bit. I'm still undecided which technique I prefer: the circular saw produces faster, cleaner cuts but can cause damage if not directed properly. The router will trace an edge effectively but I am scare of using hand routers expecially when on a ladder, and the cutting is slow.

With the structure largely finished I could slow down, but I still wanted a more water-tight structure as Oregon's winter loomed ahead. 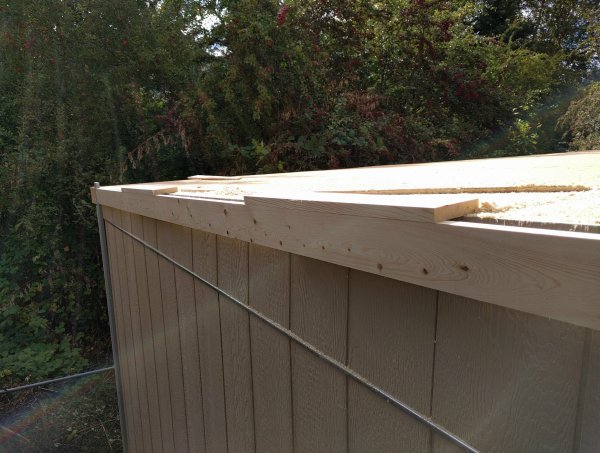 2017-10-08 Crawling on the roof to attach trim boards. I had to do a lot of small surgery thanks to my inability to attache boards squarely to the joists. 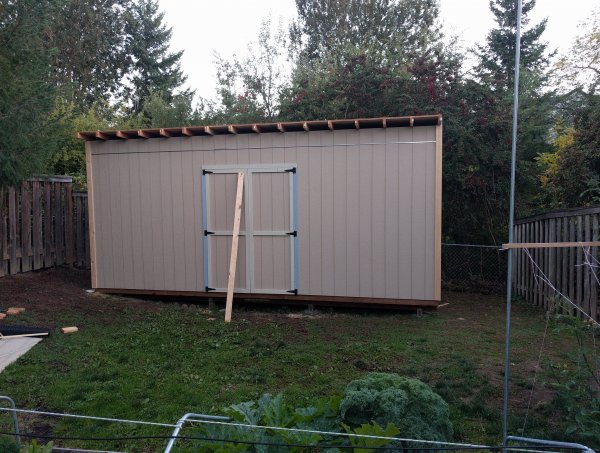 2017-10-13 Doors built and attached. They turned out well, but they definatley take some effort in order to swing properly. I also added a padlock instead of a board leaning against the structure.

This is also a good pictue to comment on the ventalation at the top. This is not according to the plans, but during the summer I can enter the shed and it is only marginally warmer than ambient. Later I used a staple gun to attached gutter mesh to keep animals out, and so far I have not noticed any new tenants. 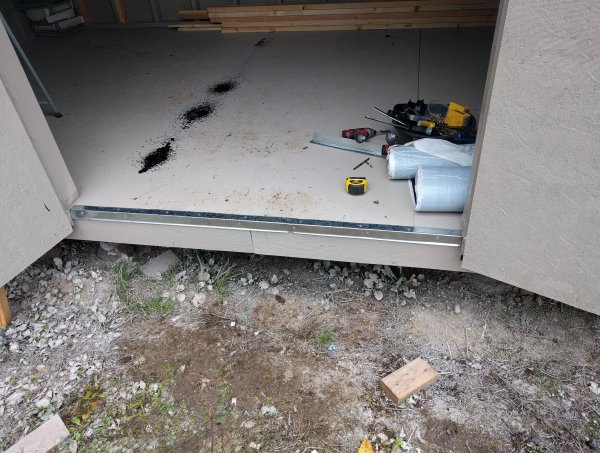 2017-10-22 The reminats from roofing the shed. I used self-adhesive roll on roofing designed for low slope applications. I found the instructions confusing because there are many optional steps in applying the roofing. For example, and optional step is to tar the surface before rolling out the roofing. I had some foundation sealant that I applied to the roof, but it just made a mess (seen on the floor here). That said, I managed to install the roll-on roofing myself in a few hours, and I would most likely use the product again. 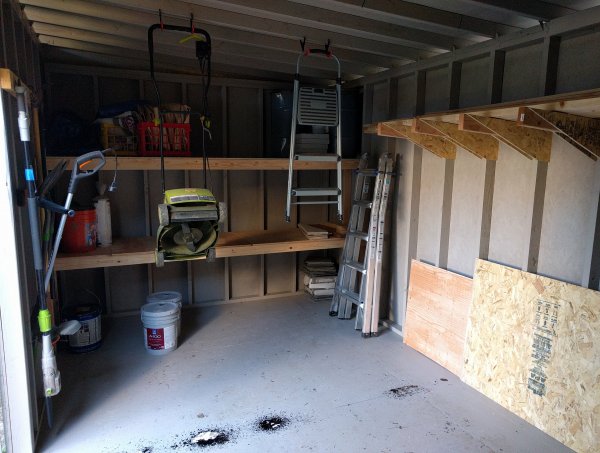 2017-10-28 I had some extra materials left over from the construction which were quickly drafted into building shelves for the shed. I am particularly proud of my wood storage rack on the right of the picture, which uses some left over t1-11 to permit a cantilever for storing boards.

Perhaps not vey noticable is the shed is now painted, including the interior. I chose the same colour as my home exterior which is a boring grey. By renting an airless paint sprayer I was able to finish in four hours. My biggest problem was not having enough paint; the exposed joists of the interior took a lot of paint to cover. 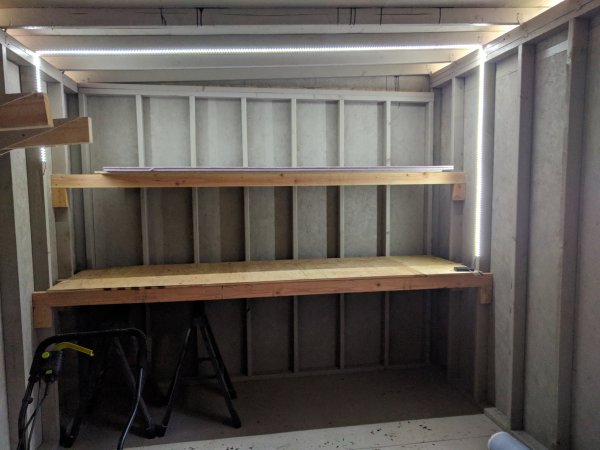 2018-01-13 My shed does not have electricity. While I would like to add that in the future, electricty would require a permit and running the line accross my french drain. For now, I have some 12V LED strip lights with batteries. These are a nice accessory, but during the day the door provides the most light.

Building this shed was a fun, satisfying project. I take great pride on the quality of construction, and would change very little from my workflow if I needed to build another similar structure. Some considerations:

Excluding labour, I estimate I saved 1-2 thousand dollars on the project over a kit or prebuilt shed. A foundation would be also be needed for a kit, so no savings would of occured there. Kits may advertise features like additional doors or windows, but from my perspective I need only one large door and as many walls as possible for storage.

For my labour, I probably have 40 hours actively working on the structure or collecting materials from the home improvement centre. Additionally, in the months leading up to the construction I invested a significant time researching how to build a structure. I probably have around 40 hours in this research time, although much of this time was when I would watch how-to videos anyway.

A brief list of the major mistakes and wins on the construction of this project:

This is a relatively small project, but the techniques applied mirror real home construction. A shed is a low risk and budget undertaking, but really let me demonstrate the limited learnings of construction I've encountered through TV or conversations. It also has freed up space in my garage, which is one half car bay and one half workshop.